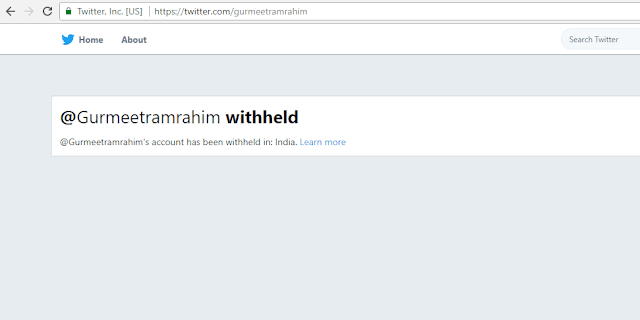 The Twitter account of Dera Sacha Sauda chief Ram Rahim Singh, who is in jail serving 20 years of sentence after he was convicted of raping his two disciples, has been disabled by Twitter.The Twiter account of the Messenger of God has not been suspended or deleted. Twitter’s policies allow restriction of a Twitter account in a specific region and that is exactly what the micro-blogging social media platform has done with Gurmeet’s account.
If a Twitter user in India now tries to access Gurmeet’s account, he or she will be shown a message, which says that the Twitter account has been restricted in India. Although the account and the tweets of the profile can still be accessed using a proxy server or by Twitter out of India.
It is not clear, as of yet, as to whether Twitter restricted Gurmeet’s account following any government directive or if it was done voluntarily by the site. But Twitter does have a policy, in place, which lets them restrict tweets or Twitter accounts locally.
“Many countries, including the United States, have laws that may apply to Tweets and/or Twitter account content. In our continuing effort to make our services available to users everywhere, if we receive a valid and properly scoped request from an authorized entity, it may be necessary to reactively withhold access to certain content in a particular country from time to time,” notes Twitter on its website.
In simple words, after Gurmeet Ram Rahim was convicted of rape, it is a possibility that Twitter also received a notice for suspension or deletion of his Twitter account in India. However, chances are instead of deleting the account, Twitter is complying with the Indian law by restricting Gurmeet’s account in the country.
Gurmeet’s Twitter account has over 3.6 million followers. It’s a verified account, although, mostly the tweets that featured on the account were bland, generic and full of self-promotion.The Twitter account of Honeypreet Insaan, the controversial adopted daughter of Gurmeet Ram Rahim, is still accessible in India.
Facebook
Twitter
Pinterest
WhatsApp
Telegram
VK