Victory Venkatesh’s birthday special and the makers of his upcoming movie ‘Narappa’ has released a short video Glimpse Of Narappa. To say the least, Venkatesh’s look is spine-chilling though we already have seen this look in the first look posters of the remake. Here, the Glimpse Of Narappa is terrific because Venkatesh is seen in action in that cold-blooded look walking like a lion ready for a kill.

The Glimpse Of Narappa BGM of this bit is from the original though the music director for the remake of ‘Asuran’ is Mani Sharma. Music Director Mani Sharma’s background score has always been one of the plus points about his music and there are some fans who expected him to deliver something new instead of using the same BGM from the original Tamil movie.

The emotion conveyed in the promo is very strong and it’s required. By the way, fans are rejoicing the release of this glimpse video as a gift for them on Victory Venkatesh’s birthday on 13th December. This promo is creating good buzz and hope, there would be a regular flow of updates, hereafter. Narappa is a Remake of Tamil Asuran.

Based on the popular Tamil novel Vekkai, Asuran turned out to be a blockbuster with over Rs 100 crore in gross earnings. Directed by Vetrimaaran, the film is the violent revenge story of a father, a farmer, who avenges the ruthless murder of his elder son. The film featured Dhanush in dual roles, playing his character over two generations. Produced by Kalaipuli S Thanu, Asuran had music by GV Prakash Kumar and was predominantly shot in the interiors of Tamil Nadu. 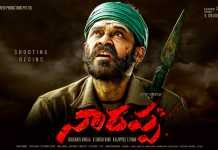