Watch Gandii Baat Season 4 Web Series All Episodes will premiere on 7th January on Zee5 and AltBalaji. The highly-rated Gandii Baat web series has earned a reputation amongst the masses for its depiction of stories revolving around the reality of stigmas and taboos associated with $exual preferences and equations.

‘Nar Naari’ is all about rural beliefs with the men and women of a village crossdressing for a week in their bid to rid themselves of a curse. In their fear of not wanting to be changed to the opposite gender, the episode gives viewers a lesson where they understand the emotional, physical, and psychological effects on women leading to a better understanding and comfort between couples. (Gandii Baat 4)

The second story, ‘Kama Village’ is from the village Kaamj. While trading women for money has been witnessed for centuries, the twist in the tale here is seen where it’s the men and not the women who find themselves in the sex trade with their better halves being the traders.

The third story, ‘Amar Prem’ is the story of a woman who feels different kinds of emotions for the two lovers. While polygamy amongst men is not frowned upon, the same for a woman is tagged as a characterless act. The episode, like its predecessors, aims to break stereotypes by telling us that polyandry should be acceptable as well.

The final story, ‘Purana Becho Naya Kharido’ is a story that brings two lonely hearts together. With emotions and passions running high, the episode gives the viewer a lot to guess about once a murder takes place. 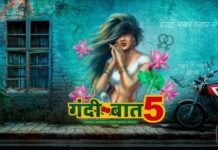