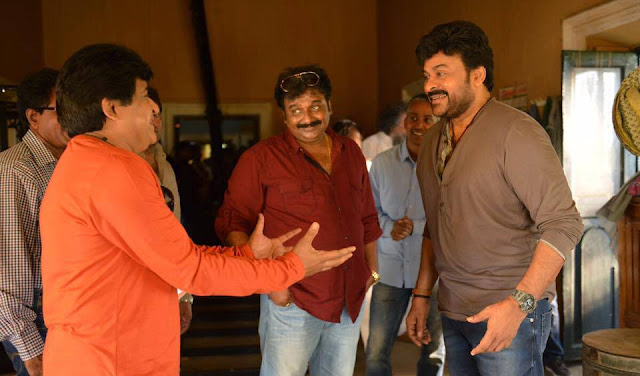 On this happy occasion, Director VV.Vinayak stated “today, we kick commenced our film shoot. We are canning few comedy scenes today with Mega Star and Ali . The first schedule of the film take place in around Hyderabad until 12th July. The film will make Mega fans very happy and they will love Chiranjeevi‘s look in the film. All top actors and Top Technicians are working for this movie. We will release the First look teaser very soon !!.

Advertisement
I am very Happy that once again I got an opportunity to work with Mega Star Chiranjeevi after delivering Block Buster hit film ‘Tagore’. As this film is Mega Star’s 150th film, we are leaving no stone unturned. Chiranjeevi‘s character and this film will reach his fans expectations for sure. Comedy, Music, Fights, Sentiment and everything will be a major highlight for this film.
The movie is all about poor farmers and their struggles.story came out very well and everyone appreciated it.Chiranjeevi garu and his family were excited after hearing the final output. We are very confident on the film and we hope audiences will like this film. We will announce the  title of the film soon”. Megastar Chiranjeevi #Boss Is Bacck Trending New.
Advertisement