One of the many developers is nCore Games that on Friday announced a new Indian version of PUBG Mobile called FAU-G or Fearless And United: Guards. The FAU-G game is said to release soon. nCore Games should reveal the release date and other details about the game in the days to come. FAU-G has already been trending on the internet for a few days now and garnered a lot of eyeballs because of the uncanny resemblance of its name with PUBG, which is no longer available to download in the country.

Vishal Gondal, CEO of GOQii said via an official tweet that FAU-G is developed in response to Prime Minister Narendra Modi’s Atmanirbhar App campaigner. The announcement comes just two days after the government of India banned 118 Chinese apps including PUBG Mobile and PUBG Mobile Lite. Notably, the FAU-G game is being developed under the mentorship of Bollywood actor Akshay Kumar.

Supporting PM @narendramodi’s AtmaNirbhar movement, proud to present an action game,Fearless And United-Guards FAU-G. Besides entertainment, players will also learn about the sacrifices of our soldiers. 20% of the net revenue generated will be donated to @BharatKeVeer Trust #FAUG pic.twitter.com/Q1HLFB5hPt

nCore Games is yet to reveal more details about the action game. Talking about the game, Gondal said that FAU-G, as the name suggests, will lesson players about the sacrifices of Indian soldiers. He also said that 20 percent of net revenue will be donated to BharatKeVeer’s trust.

Here’s everything we know about the FAU-G game so far. 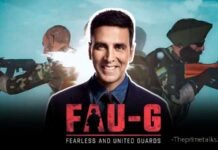