The accused, Rohit Soni, 23, is a resident of Churu in Rajasthan and is a B.Com graduate, they said. According to a police statement, they received a complaint from Amazon where the company stated that someone had created a fake website to dupe the people by using its brand name. The police identified a Rohit Soni as the creator of the website during an investigation and arrested him, a senior police officer said.

During interrogation, it was revealed that he had started a blog in 2016 which became very popular and later he decided to earn money through it, police offers said. He created a fake website in the name of Amazon which also looked like its original website, the officer said. The accused asked visitors to click on a link which made them download app “4Fun“, and for every download, he got Rs 6, they added. (Snapdeal.com)

The man has a record of being involved in such crimes. “Same accused was arrested earlier for creating fake government websites in the name of free laptop and free solar panel,” CyPAD said in a press release. The fake website also induced people to download an app that helped him earn Rs 6 per download. The accused previously owned a very successful blog which gave him the idea of large-scale cheating by diverting internet traffic statistics to his fake websites by impersonating government departments and big private companies. 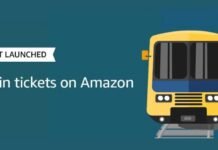 How to Book Train Tickets on Amazon Pay (Step by Step)