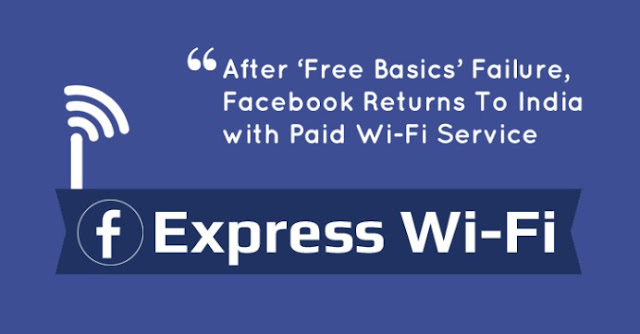 After the failure Free Basics of Facebook an initiative to provide free Internet access in India due to the violation of Net Neutrality principles, Facebook has reintroduced its plan to provide Internet access in rural India, but this time: The social networking giant is planning to launch a commercial WiFi service in India. Facebook is testing a WiFi service in rural India, allowing
Advertisement
The Facebook has confirmed that it is in the early stages of testing a wi-fi service with Indian internet service providers (ISPs).Facebook Express Wi-fi allows users to purchase data from local providers in order to access the web.A pilot version with a state-run telecoms company has already been offered at 125 rural wi-fi hotspots.
In announcement Facebook said the tests were being carried out with “multiple local ISP partners”.Facebook is probably hoping that users who first encounter the web via a Facebook initiative will be more likely to become users of the social network – rather than a competitor – according to Ian Fogg, an analyst at IHS Technology.
“In emerging economies, Facebook is pursuing an intervention strategy to increase the pace of internet and online usage because this will also raise the addressable market for Facebook,” he told the BBC.Earlier this year, Facebook’s Free Basics internet service app was blocked by India’s telecoms regulator.A ruling in favour of net neutrality put a stop to the plans.
Advertisement