The stunning hot model Emily Ratajkowski posed naked to protest the recent Alabama law prohibiting abortions. She reportedly shared a photo on Instagram, where she decried the ‘25 old white men‘ who approved HB 314, a comprehensive bill essentially banning abortions even in the event of rape and incest.

Emily Ratajkowski statement went: ‘This week, 25 old white men voted to ban abortion in Alabama even in cases of incest and rape,’ she wrote online. ‘These men in power are imposing their wills onto the bodies of women in order to uphold the patriarchy and perpetuate the industrial prison complex by preventing women of low economic opportunity the right to choose to not reproduce.’

The law that was passed in Alabama severely restricts the rights of women over their own bodies. Reportedly HB 314 was approved by a vote of 25-6 in the Republican-led Senate and is set to come into effect in six months, and doctors who defy the law could face 99 years in prison.

In the Emily Ratajkowski Posed Naked photo, she kept her arm over her chest and positioned a pink flower below. Emily Ratajkowski seems to be standing with all the women who will be affected by the law. Reproductive health is a serious issue that the new law seeks to curtail. There have been quite a few controversial remarks on the topic of abortion from those that see it as murder. 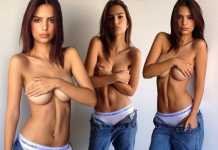 Emily Ratajkowski Strips Down Completely to Treat her Instagram followers