Ek Mini Katha Telugu Movie 2021 starring Santosh Shoban and Kavya Thapar in lead roles built good buzz and anticipation with interesting songs, videos, teasers, and posters. Now, the filmmakers UV Creations have sealed the Ek Mini Katha Release Date and a fresh poster publicizing the same was unveiled a while ago. Ek Mini Katha film is all set to hit the theatres on April 30, 2021.

In the Ek Mini Katha Release Date poster, Hero Santosh Shoban can be seen measuring something with hesitation. Does Size Matter? Tagline and The cast of Ek Mini Katha Film are seen in the background. Ek Mini Katha will have a huge advantage of solo release as not many films are releasing later this month or early next month.

The makers of Ek Mini Katha have unveiled the first look poster and teaser a few weeks ago and it had a superb response from viewers. The first lyrical song, Ee Maya Lo was a massive hit when it was released. It has certainly raised the expectations of audiences. 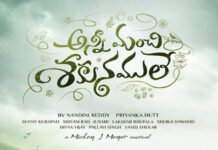 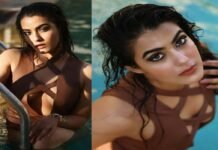