The Indian Space Research Organisation has successfully launched the Earth observation satellite RISAT-2B from Sriharikota. ISRO‘s trusted workhorse PSLV-C46 carrying RISAT-2B blasted off from the Satish Dhawan Space Centre at 5:30 this morning. The 615 kg satellite was released into the orbit 15 minutes after the lift-off. RISAT-2B meant for application in fields such as surveillance, agriculture, forestry, and disaster management support. It will replace the RISAT-2, which was launched in 2009.

Soon after the Earth Observation Satellite RISAT-2B launch, ISRO Chairman K Sivan said this particular mission is really important in the sense that PSLV has crossed a landmark of launching 50 tonnes into space. Shivan said, there are several new features in RISAT-2B. Dr. Sivan said it is having expanded Synthetic Aperture Radar (SAR) making it an advanced earth observation satellite, operating in spotlight mode, mode, and mosaic mode.

In the coming months, ISRO will launch the much-anticipated lunar mission Chandrayaan 2 between July 9 to 16. More than 10 satellites, which are in different stages of production, are in the pipeline. The space agency will launch Cartosat-3, the first in a new series of high-resolution optical surveillance satellites and Geosynchronous Satellite Launch Vehicle F10 and F11 missions. 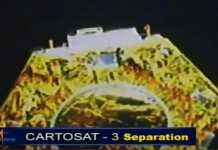