Another jewel added to the City of Pearls! pic.twitter.com/s7w9UBf5QC

The 754.38-meter long bridge built cable-stayed bridge has been constructed by the Greater Hyderabad Municipal Corporation under the Strategic Road Development Programme (SRDP) at a cost of Rs 184 crore. The Durgam Cheruvu Cable Bridge is said to be the world’s largest span concrete deck cable-stayed bridge. With the launch of the bridge, the passenger’s travel time between Jubilee Hills and Hitec City will be reduced. The structure has already garnered public attention for its unique style and engineering marvel. At least 5000 visitors are seen at the bridge every day.

The world’s largest Durgam Cheruvu cable bridge in Hyderabad has completed all the civil works and is looking forward to the inauguration. The 754.38 long bridge built at a cost of Rs 184 crore will be opened for traffic soon. In the latest, the visuals of the Durham cheruvu cable flyover are mesmerizing the public is an added attraction to the structure.

A video of the bridge has been shared by the Municipal Administration and Urban Development Minister KT Rama Rao on Wednesday. “A sneak peek of the very soon to be unveiled cable-stayed bridge on Durgam Cheruvu. Infrastructure is the key to growth & Telangana Govt spends over 60% budget on infra creation. Great job engineering team,” the minister tweeted sharing the video.

The #DurgamCheruvuBridge is now open to the public. Here are a few glimpses from the inaugural ceremony of the cable stayed bridge. Take a look. pic.twitter.com/LbP1o0WwME

People could not take off their eyes from the colorful lights along the bridge which will enhance the glory during festivals and special occasions like Diwali and Independence Day. The multi-colored lights will change its theme according to the occasion. According to the GHMC, around 25 different themes were finalized which will be programmed into the system after the government’s nod. 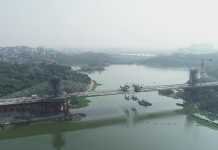