Drishyam 2 Review: Mohanlal’s Drishyam, directed by Jeethu Joseph, is one perfect film that manages to keep you glued to the screen till the last frame. six years later, the film’s sequel, Drishyam 2 skipped theatrical release and hit on Amazon Prime Video on February 19. Did Drishyam 2 live up to expectations? let’ see Drishyam 2 Movie Review, Rating, Story, Below:

Drishyam 2 film begins right where it ended in the first part. It has been six years since Georgekutty (Mohanlal), Rani (Meena), and their kids were stuck in the case of murdering Varun, son of Inspector Geetha Prabhakar (Asha Sharath). But, the village where Georgekutty lives, doesn’t want to let go of them. And neither do the police.

Asha’s friend, who is the current IG investigating the case, deploys shadow police officers to get the truth out of Georgekutty and his family. But, Georgekutty is always prepared. How does he manage to escape from the police officers this time forms the rest of the story?.

Like the prequel, Drishyam 2 film to is based on a drama with some unexpected twists that unfold at the right time. Malayalam Megastar Mohanlal tops the show and he looks subtle with his performance throughout. He adds life to the role of Georgekutty. Most of the time, his expressions speak out as he has little to speak. South Actress Meena plays well as a struggling mother and wife in the sequel. Murali Gopi gets a challenging role as the cop Thomas Bastin.

The first half of the Drishyam 2 Movie looks convincing and keeps decent expectations on the second half. The second half of the Drishyam 2 film lives up to the expectations because of the performances and the twists. Jeethu Joseph, the writer, and the director is the real hero of the film. The court scenes should have been better and the minor flaws will not be remembered by the audience. Both the daughters Ansiba Hassan and Esther Anil did their jobs well.

On the whole, Drishyam 2 lives up to the expectations and is a perfect sequel. It is worth watching on Amazon Prime Video. 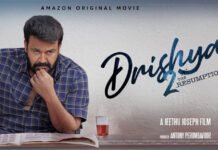 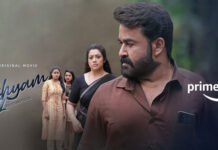 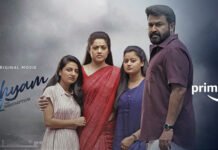