Dil Bechara Story: Sushant Singh Rajput’s Dil Bechara Story about as romance blooms between two youngsters fighting cancer, Kizie and Manny, they live it up to the fullest, despite the inevitable tragedy looming over them.

The Dil Bechara movie is narrated in a voiceover by Kizie Basu (Sanjana Sanghi), a college student in Jamshedpur who discovers that it is next to impossible to resist the infectious energy, spirit, and persistence of Immanuel Rajkumar Junior (Sushant Singh Rajput). Manny, as he is known, is equally taken by the college student whose constant companion is “Pushpinder”, her oxygen tank. The courtship soon turns to romance as they bond at the cancer support group to which they belong, share movies and music, and embark on a once-in-a-lifetime adventure.

Dil Bechara Movie Review: Dil Bechara is a fairly faithful remake of Hollywood drama that was based on John Green’s young adult novel The Fault In Our Stars. Sanjana Sanghi and Sushant Singh Rajput step into the parts played by Shailene Woodley and Ansel Elgort in the Hindi adaptation scripted by Shashank Khaitan and Suprotim Sengupta. The Dil Bechara film’s message of laughing in the face of death is bittersweet and poignant. It’s not just a movie but emotion for the Indian audience as lots of memories including Sushant Sing Rajput’s are attached to it.

Dil Bechara Movie Verdict: OverAll, Dil Bechara is a simple romantic drama that has some heartwarming performances by Sushant Singh Rajput and Sanjana Sanghi. Though the film could have been a bit strong in the emotional department, AR Rahman’s solid music keeps you afloat. Finally, actors like Sushanth Singh Rajput come rarely and for this, one needs to watch Dil Bechara film with an open mind and enjoy his screen presence one last time and May his soul rest in peace (RIP). 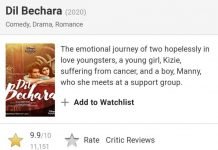