The Telangana State Tourism Development Corporation (TSTDC) has appointed Bigg Boss Telugu 4 contestant and YouTuber Dethadi Harika as its brand ambassador. An appointment was made by TSTDC Chairman Uppala Srinivas Gupta on the occasion of the 2021 International Women’s Day Celebrations.

Uppala Srinivas Gupta, following International Women’s Day celebrations at the TSTDC office, said that from now onwards, Telangana Tourism staff would wear handloom clothes to promote and support handloom weavers in the state. The YouTuber’s services would be used by TSTDC to promote tourism in Telangana on different platforms.

Alekhya Harika was one of the top five contestants in season four of Bigg Boss Telugu 4 and the first one to be eliminated from the race in the top five. Dethadi Harika entered the Bigg Boss house from the fame that she attained through her YouTube channel; Dethadi, backed by Tamada media. 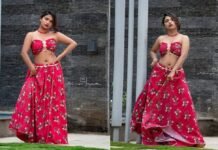