Degree College Movie Story: Set in the Telangana backdrop, Shiva (Varun) is a guy from the lower caste who falls for Parvathi (Divya Rao), a reputed cop’s daughter. As Parvathi’s father is against their love, the couple elopes and get married. After a lot of effort, Parvathi’s father brings her back home. What will the further proceedings lead to? Will Shiva and Parvathi reunite again? What will be the end of this love story? To know that, you have to catch the movie in the theaters.

Degree College Movie Review: Noted Telugu director, Narasimha Nandi, who is known for making social-oriented films is back with a youthful romantic drama, Degree College Movie is a message-oriented social drama that exposes the inequalities in society. Leaving the story aside, Narasimha Nandi’s screenplay and narration are painful. Instead of dealing with the story in a regular way, he should have inserted a few twits. But as a huge disappointment, the narration falls flat soon after the movie shifts to the college backdrop in Warangal. The climax portion is totally illogical and irritates the audience.

Degree College Movie Cast Performance: Actress Divya Rao is the main highlight as she performed her strong and daring role quite impressively. Not only she looks cute but has a commendable screen presence. Her dialogue delivery and ease in Telangana slang are things to watch out for in the movie. Actor Varun is decent in his role and has a good voice but he needs to improve a lot acting-wise. (Degree College Movie Trailer) 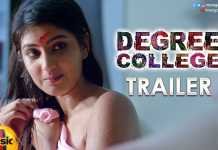