After making a strikingly impressive outing at the Met Gala 2019, Deepika dazzled at the red carpet of Cannes Film Festival 2019 with a spectrum of silhouettes that got the world swooning. Deepika Padukone commands the title of being the most commercially viable actress in the industry, in addition to being one of the highest paid actresses.

Deepika Padukone, on the other hand, is a self-made actress. And contrary to most other cases, she has increased her brand-value after her marriage and her performances resonate with audiences. In the case of most female actors, brand values fall post marriage but in the case of Actress Deepika Padukone and Ranveer Singh, it’s the opposite. They have actually been able to keep their independent brand intact, unlike Anushka and Virat, who come as a couple, he adds.

After bringing to screen the courage and valour of Rani Padmini, Deepika Padukone is also with personifying another tale of bravery and human spirit with Malti, an acid attack survivor. Drawing instances from the life of Laxmi Agarwal, Chhapaak is a story of the strength and integrity of a woman. Helmed by Meghna Gulzar, the film is all set to release on January 10, 2020. 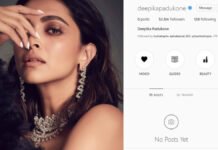