Clap is a Tamil-Telugu bilingual and has music by maestro Ilaiyaraaja. The shooting of this movie is completed and the release date will be announced shortly. 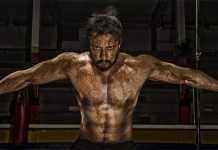