Veerababu (Vikas Vasishta) is an auto driver who spots a DSLR camera. After planning to sell it off initially, he eventually decides to make a film with the camera and makes his auto into a caravan. He hires a local wedding photographer named Ganapathi as the cameraman and a salon guy Maridesh Babu as the hero and casts vegetable vendor Manga (Uma Yaluvalli) as the heroine of his movie with pure fun and is shot in real locales.

How did Veerababu and his team, who do not even know the difference between costumes and shot, make the film? What problems did they face in the process of making film? How did the people of their village help them? What’s the mystery behind the DSLR camera? Did Veerababu and Ganapathi finally make the film they wanted or not? form the rest of the story.

Director Praveen Kandregula’s Cinema Bandi is loaded with pure fun and is shot in real locales with fresh faces who are never into films. The film is loaded with entertainment and the episode in which the team hunts for the lead actors is just hilarious. It is followed by the lead actors running away on a train and other comic episodes. The dialogues are realistic and the film also has an emotional drama that starts after the camera is taken from the team.

The Cinema Bandi Climax portions are hilarious. Cinema Bandi is made on a strict budget as per the demand of the script and the premises. The songs are good and they are not forced. The entire cast is doing their first film and they did their parts well. Backed by a decent technical team, Cinema Bandi is a good attempt to kill time and makes a decent watch on digital space.

Overall, Cinema Bandi film showcases the hilarious plight of innocent villagers who set out to make their first film with a DSLR camera in hand and immense passion in the heart. Director Praveen Kandregula Beautifully conveys the film’s message – anyone can be a filmmaker at heart in the most realistic and rooted fashion. Cinema Bandi Full Movie Online is streaming now on Netflix and makes a decent watch this weekend. 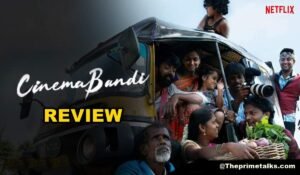