It is a romantic song that shows the blossoming love between the lead pair Abbavaram and Priyanka Jawalkar. The film’s protagonist Kiran Abbavaram is seen swooning over Priyanka Jawalkar and follows wherever she goes. Though she hates it initially, she falls for his funny antics after some time and the journey of their love is showcased in an entertaining manner.

It looks like Priyanka Jawalkar has upped her glamour quotient for this song as the director focused on elevating her beauty through various angles. On the whole, the Choosale Kallaraa song manages to impresses though it may not be instantly addictive. ”SR Kalyana Mandapam EST 1975” sees Kiran Abbavaram plays the role of Kalyan while Priyanka Jawalkar essays his love interest Sindhu.

Veteran actors Sai Kumar, Tanikella Bharani, and Tulasi have been roped for crucial roles in the film. Tipped to be a romantic family entertainer, ”SR Kalyana Mandapam” has been directed by debutant Sridhar Gade and bankrolled by Elite Entertainments. Daniel Viswas is in charge of handling the cinematography. 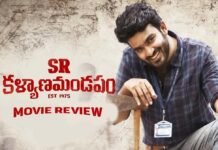