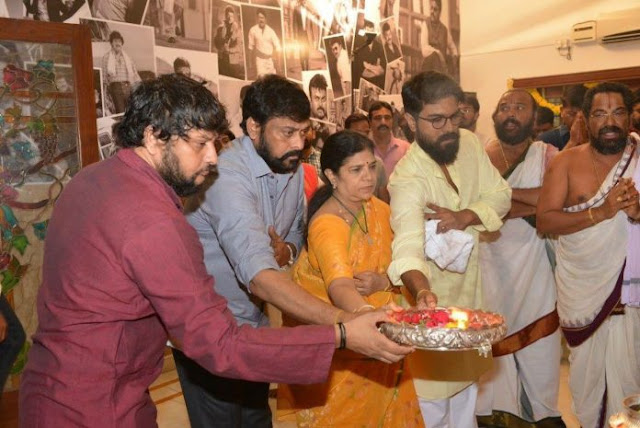 Megastar Chiranjeevi’s 151st movie Uyyalawada Narasimha Reddy, a biopic based on the life of freedom fighter from Kurnool, is launched today at Konidela Production Company office with formal pooja Ceremony.
The launch event was attended by Chiranjeevi’s family, Surender Reddy and few of the members of the film unit.The upcoming patriotic saga is going to be the biggest project in Chiranjeevi’s career and he will be seen sporting twirled mustache for his character.
The title logo of the film, to be helmed by Surender Reddy and produced by Ram Charan, will be released on 22nd August on the occasion of Megastar Chiranjeevi’s 61st birthday. The details of cast and crew will be out very soon. According to the latest buzz, Ram Charan is willing to rope Nayantara and Aishwarya Rai Bachchan to play the female lead role.