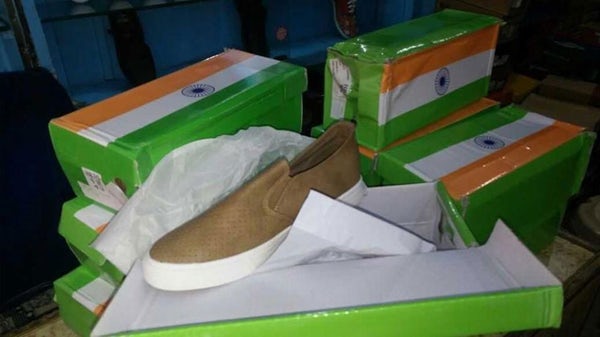 Chinese’ Shoes Packed in Tri-Colour Boxes: A case was registered on the complaint of shopkeepers in Almora after they received the shoes from China wrapped in a cardboard box with Tricolour posted on them.
The box carried tricolour on top and labelled with Chinese characters on its base stating, ‘origin of China’. The shoe boxes prevailed tension in the town as most of the shopkeepers received the shoes with Indian flag on it. They were imported from China. “I received the goods on Thursday and when I opened the bags, I was shocked to see the flag on the shoe boxes. Later I called the police, sensing something wrong,” a shopkeeper said.
The police officers said the move was intended to humiliate the feelings of residents after the standoff between India and China at Doklam. Senior Superintendent of Police of Almora P. Renuka Devi said, “At present, we can confirm that the boxes were supplied from Delhi to the Rudrapur dealer. We have requested Udham Singh Nagar police to question the dealer to ascertain the origin of these boxes.”
Facebook
Twitter
Pinterest
WhatsApp
Telegram
VK