The Chanakya Pre-Release Event is managed by Shreyas Media. You get the entry passes for the film by downloading the Shreyas ET app. The tickets are sold for free. You can watch the Chanakya Pre Release event live on almost all news channels. The event will also be streamed live on AK Entertainment’s YouTube channel. And some other news channels will also be streaming it.

Chanakya Movie stars Gopichand, Mehreen Pirzada, and Zareen Khan. This mystery thriller is written and directed by Thiru Subrahmanyam. Chanakya music is composed by Vishal Chandrashekhar. Vetri Palani Samy is the cinematographer. The film is produced by Anil Sunkara under the banner of AK Entertainments.

The Chanakya is a spy thriller movie which revolves around Arjun, a RAW Agent, and his mission against terrorism. Packed with captivating action sequences and secret operations to safeguard the country, this thriller will leave you at the edge of your seat. The Chanakya Full movie 2019 is all set to release on 5th October. 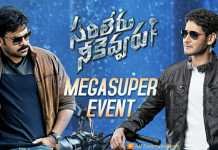