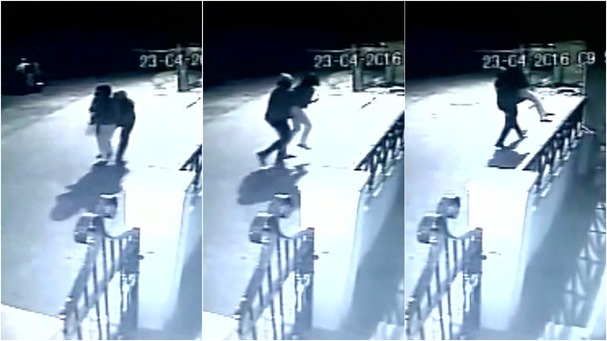 Cab Driver Caught Kidnapping a Girl in Bengaluru CCTV Footage: Watch inside story 22-year-old girl abducted & molested in Bangalore. Cab driver lifted her from behind and took her to an under-construction site. The girl alleged that the PG owner and his relatives opposed her from filing a complaint.The incident that was captured entirely on the CCTV fixed on the street happened at Katriguppe on April 23.
Advertisement
The Metropolitan cities nowadays became famous for the women assaults and safety became a mere dream to all the women over there. This story is another proof that supports our statement.A 25-year-old girl was kidnapped on street in Bangalore while she was speaking a phone call in front of her PG gate. The girl was lifted suddenly from her back by an unknown boy. She has been taken to an under construction building where that guy attempted to rape her.
But fortunately, the girl was escaped as she tried hard to beat him up. Though there were some people when this incident occurred, no one had put their efforts to save that girl, reportedly. The girl herself fought with the guy and he was escaped in fear of being caught by the police. This incident happened in Katrigupee, Bangalore.
The girls say, “I got a call from my friend and I was talking with him standing outside the PG. Suddenly a guy from my back lifted me and ran away by carrying me on his shoulder. He took me to an under construction building, where he attempted to rape me. But as I started screaming for help and tried to escape from him, four people ran towards me but none of them helped them helped to escape from him. But as he was in fear of getting caught he ran away. ”
The girl also added that “I will identify him if I see him, I want the person to be arrested.” So girls are careful when you are alone. Keep an eye on your surroundings though you are involved in some other work. Take this girl as inspiration and try to escape from this kind of incidents.