Speaking on the 2-years anniversary of his government: an emotional BS Yediyurappa said his government had fought for the farmers, Dalits, and the people of this state. “I have been continuously working for strengthening the party in the Karnataka state,” added the 78-year-old Lingayat strongman, whose exit was protested by not just powerful seers in the state but even opposition leaders.

It has been an honour to have served the state for the past two years. I have decided to resign as the Chief Minister of Karnataka. I am humbled and sincerely thank the people of the state for giving me the opportunity to serve them. (1/2)

Yediyurappa clarified that resignation is his own decision—no one forced him to resign. “No one forced me to resign from high command—I only decided to give resignation,” Outgoing CM BS Yediyurappa said. On being asked if he is willing to serve as a Governor of any state, he added: “There is no question about me leaving the state. I will continue to work for the welfare of the people of Karnataka.”

We will work under whoever has been selected as the new CM by the (BJP) high command. I will give my 100% and my supporters will also give their 100%. There is no need to make any inference of dissatisfaction: outgoing Karnataka CM BS Yediyurappa. 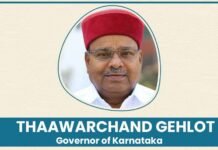