Bombhaat Movie Story: Vicky (Sushanth Reddy) is a guy who is always unlucky in life. He is friends with a scientist who suddenly goes missing and leaves his daughter Maya (Simran Chowdary) with him. The twist is the tale arises when Vicky comes to know that Maya is none other than a humanoid robot. This is also a time when yet another scientist (Makrand Deshpande) goes after Maya. Who is this Maya? Who created her? What is the whole science fiction angle in this film? To know the answers, you need to watch Bombhaat Movie online on Amazon Prime Video.

Bombhaat Movie Review: For the most part of Director Raghavendra Varma Indukuri’s Bombhaat you struggle to understand what this film is about. The whole mad-scientist angle could have been a thrilling affair in a capable director’s hand. Here it is as silly as it can get. The other track involving a goon coming after the professor’s daughter is much worst. Basically, one doesn’t have any respite from the terribleness from any angle.

The proceedings go on and on with more silliness adding to it. The introduction of the second heroine and how the whole thing pans out shows the director and his team have put no effort at all to make an engaging affair. What we get is kindergarten level scenes for entertainment and tacky Hollywood copies for sci-fi parts.

The ending makes the whole thing seem never-ending, as it goes on for a long time. The sheer predictability and silly execution make the entire viewing experience unbearable. It is if one can reach that point, though. 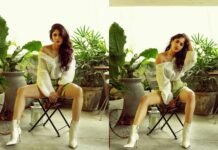