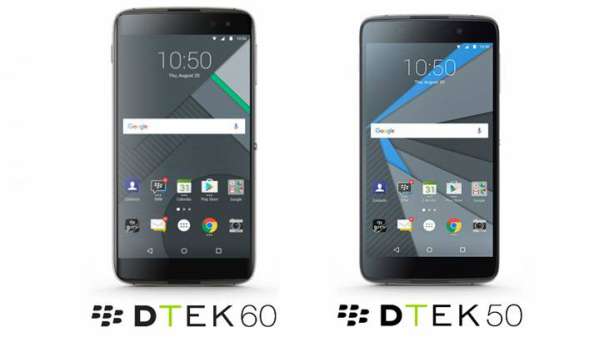 Blackberry DTEK 50 and DTEK 60 Android Based Smartphones launched in India Price at Rs. 21,990 :

BlackBerry India head Narendra Nayak has said that Blackberry is a software company in every way now with end-to-end cross-platform mobility solution with secure connections. The company now has four pillars: enterprise solutions, technology solutions, secure messaging and secure handsets. As the new world of handsets is the company’s last priority.

The company also announced a new distribution partnership with Optimus, one of the larger players in the Indian mobile ecosystem. The company has a joint venture with Vistron for manufacturing and is also a distributor for Samsung and Plantronics. As the DTEK 50 is an affordable smartphone which was announced first in July 2016. BlackBerry DTEK 50 is company’s ‘thinnest phone ever’ at 7.4 mm.
However, both the devices will be coming with the DTEK security applications which are security app inbuilt. The Blackberry DTEK 60 is powered with the Snapdragon 820 processor which is a highlight of the device. There’s a 3,000mAh battery under the hood with Quick Charge 2.0 technology. Both the devices runs on Android Marshmallow 6.0 OS.
Advertisement
Advertisement