Actress Bella Thorne, known for her work in movies like Midnight Sun and The Babysitter, has been a victim of hacking and threating over social media. On Saturday, Bella Thorne Nude Pictures Shared on Twitter After Threat From Hacker. Posting a series of pictures, showing grabs of Whatsapp chat where an alleged hacker is threating to post her nudes, Bella Thorne wrote, “F**k u and the power u think you have over me. I’m gonna write about this in my next book.” (Bella Thorne Breakdown after Whoopi Goldberg Slams Her)

She also wrote a note, which read, “For the last 24 hours, I have been threatened with my own nudes. I feel gross, I feel watched, I feel someone has taken something from me that I only wanted some special person to see. For too long I let a man take advantage of me over and over and I’m f**king sick of it, I’m putting this out because it’s MY DECISION NOW U DONT GET TO TAKE YET ANOTHER THING FROM ME. I can sleep tonight better knowing I took my power back. U can’t control my life u never will.”

Bella Thorne Nude Pictures Fuck u and the power u think you have over me. I’m gonna write about this in my next book😡😡😡 pic.twitter.com/0Ep0iXgW51

The incident took a day after Bella Thorne Twitter account got hacked. There were a series of racist slurs, tweets praising Hitler as a ‘genius’, pornographic images and naked screenshots from her other social media accounts posted on her hacked Twitter account. The tweets have since been deleted and the Bella Thorne Nude Pictures returned.

However, Bella Thorne is not the first actress whose social media account has been hacked. A number of female stars have had their private pictures hacked and shared in past years, including Jennifer Lawrence, Aubrey Plaza, and Kate Upton. 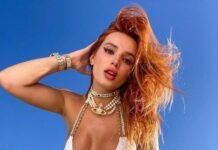 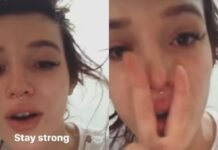