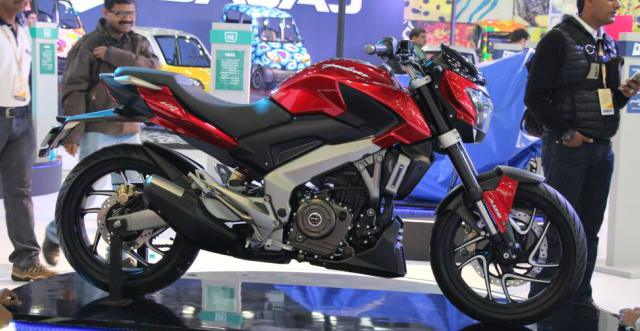 There are few slight changes expected from the Bajaj Dominar 400 model when compared to the Pulsar CS400 concept. The exclusive collection of the Bajaj Dominar 400 model will be made available in 4 different colors, dual tone Pearl white and Black, Laser Blue, and Cocktail Wine Red and Ebony Black.
Advertisement
Bajaj Dominar 400cc model specifications:
The Bajaj Dominar 400 is said to be launched with several specifications. The model comes with the source of power from an updated KTM Duke 390 sourced engine and reworked 373.2cc Single Cylinder engine.  The main LCD unit displays the speed moto OTR, fuel gauge, digital tachometer, time clock and odometer, whereas, the secondary unit of the model displays the battery indicator, Bajaj Logo, Coolant temperature indicator and ABS light. The braking with be carried out by disc brakes on both the ends along with the radially mounted floating calliper options from Byre. So all the bike lovers, gear for the launch of the exclusive Dominar 400 model in India on 15th December 2016.

The bike gets its name as “Dominar” from the Spanish word which means to dominate and excel. Exactly suiting the name, the bike is said to be dominating and excellent with great inbuilt features. The Company plans to launch the two variants of the Dominar 400, the lower variant NON-ABS or Single Channel ABS is said to be priced at INR 1.36 Lakhs (ex-showroom) and the On-road price will be Rs. 1.45 Lakh in New Delhi. There are huge expectations from the bike and the Bajaj Auto Company says that the pricing is made low so that they can sell nearly 10,000 units of Dominar 400 per month which is their target set.
Advertisement