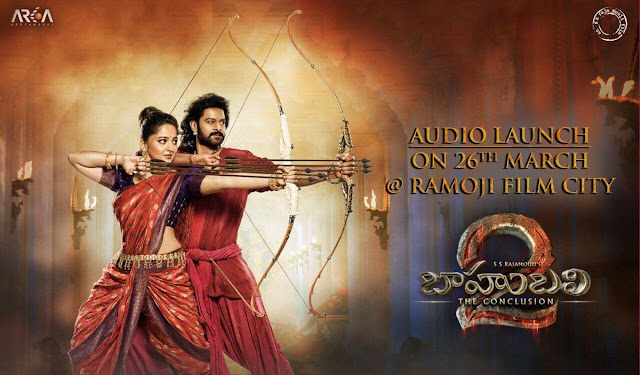 Baahubali 2 Movie Audio Launch: Recently, The Makers released Baahubali 2 The Conclusion Official Trailer ( Telugu, Tamil, Hindi, and Malayalam) on March 16th. The trailer got overwhelmed response from the audience. According to makers, the trailer has crossed 50 million views on youtube within 24 hours since the release.‘Baahubali 2: The Conclusion (Bahubali 2)‘ Movie is gearing up to release on Summer ie, April 28th. As the release date is getting closer, The fans are waiting for the Baahubali 2 movie audio launch.

The surprising news was at last revealed by the makers officially, As per the report, director SS Rajamouli and film unit are busy in arrangements for the grand Baahubali 2 movie audio launch event at the Ramoji Rao City, Hyderabad on March 26th.
Shreyas Sriniwaas, who is the chairman of Shreyas Group, has shared the arrangement photos on his Offical twitter account And he wrote #baahubali2 audio release ground work started today at #ramoji film city #Audio launch on #march 26th.

The photos feature SS Rajamouli, and his wife Rama and few other members of film unit are taking a look at the arrangements for the event at Ramoji Film City.Many of the film industry heads are expected to attend the Baahubali 2 audio launch Event/function.