Rakshith Shetty and Shanvi Srivastava featuring Athade Srimannarayana Movie Review and Rating has received positive talk from the audience. Athade Srimannarayana is a fantasy adventure comedy film, the dubbed version of Kannada film Avane Srimannarayana. Rakshit Shetty has written the script for the film with Abhijith Mahesh, Anirudh Kodg, Chandrajith Belliappa, Nagarjun Sharma and Abhilash. HK Prakash and Pushkara Mallikarjunaiah have bankrolled it under the banners Shree Devi Entertainers, Pushkar Films and Paramvah Studios. Athade Srimannarayana received a U/A certificate from the censor board and its runtime is 3.06 hours.

Athade Srimannarayana story is all about a hidden treasure that is lost. A tribe called Adheeras is after the treasure but they cannot find it. Fifteen years pass by and a fancy cop Srimanarayana (Rakshit Shetty) comes into the picture and tries to trace the treasure. Who is this Srimanarayana? What does he have to do with the treasure? and what obstacles does he face in finding the treasure is the film all about?

Athade Srimannarayana movie has an engaging screenplay, which has a lot of twists and turns. It is extremely plot-driven and has mass heroism and intense music. The introduction of the hero and other characters, treasure hunt and epic interval block are the highlights of the first half of the movie. The second half is equally good, The stunning background score, amazing picturization, superb action, and dance choreography, good special effects.

Rakshit Shetty, who is seen as a corrupt police inspector, is witty and charming. His dialogue delivery and mannerism are the highlights of Athade Srimannarayana. Shanvi Srivastava has done a good job and her chemistry with the hero is a treat. Achyuth Kumar, Balaji Manohar, Pramod Shetty, Rishab Shetty, Madhusudhan Rao, and others have also done justice to their roles, say the viewers.

All Over, Athade Srimanarayana Full Movie has a good premise, interesting concept, and superb production values. But its slow pace, complex story, over three-hour-long runtime, can get boring and confusing. The film is a fantasy drama and will be liked by those who have an eye for an intelligent thriller but for the common Telugu audience, this film is a lengthy and boring thriller with over the top scenes. 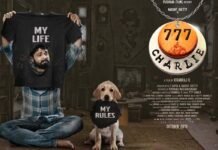