Theprimetalks.com
Home Education APSET 2016 Official Answer Key Download @ apset.net.in
Advertisement
APSET 2016 Answer Key: The official answer key for the Andhra Pradesh State Eligibility Test (APSET 2016) that had been conducted on September 11, 2016 by Andhra University on behalf of Government of Andhra Pradesh. The APSET 2016 answer keys for the general paper of Paper 1, Paper 2 and Paper 3 had been released and are available to download from the official web portal. 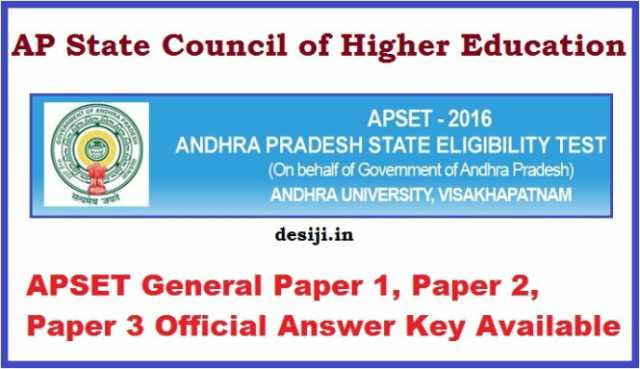 The Andhra University on behalf of the Government of Andhra Pradesh had conducted the Andhra Pradesh State Eligibility Test on September 11, 2016 successfully. The Andhra Pradesh State Education Department every year conducts the APSET exam. This year the exam had been written by thousands of aspirants successfully on September 11, 2016. Now as the exam was done, the official answer keys of all the papers of General section had been released by the University.
The answer keys ca now be downloaded from the official apset website. It is to be noted that the aspirants had to report  objection(s) with regard to the key of any paper, he/she has to appeal with substantial evidence and proof of writing the examination i. e, scanned copies and submit the same before September 25, 2016. Hence the APSET 2016 answer keys can be downloaded from the link given below.