Ammoru Thalli Movie Story about Engels Ramaswamy (RJ Balaji) is a reporter for a struggling television channel. He works on an 11,000-acre land scam for over 6 years to get promoted and move to a renowned news channel. He happens to meet Goddess (Nayanthara) one fine day and the rest of Ammoru Thalli is all about why she made her presence and digs out the fact behind Bhagavathi Baba (Ajay Ghosh). RJ Balaji’s Ammoru Thalli tries to keep it simple and drives the message home without taking itself too seriously. The initial setup is fun with Urvashi in the top form. The Ammoru Thalli film runs at a good pace until Nayanthara enters the scene. It keeps us entertained despite a couple of over the top comedy scenes until the actual plot begins.

The Ammoru Thalli Movie’s main theme is to target the fake godmen that are occupying thousands of acres of land for their ashrams. This is where Ammoru Thalli starts to slip. There is not even a single effective scene in the second half when the protagonist takes on the fake Baba.

The portions where the news reporter exposes the fake Baba lacked effectiveness. RJ Balaji filled this part with many cliched scenes and he couldn’t even deal with it in a funny way. All things considered, it is an okay watch for OTT audiences. Watch Ammoru Thalli Full Movie Online In HD Streaming on Disney+ Hotstar VIP. 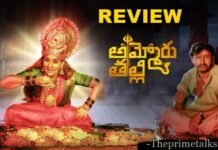