Theprimetalks.com
Home Entertainment Allu Arjun’s Sarrainodu Movie Song leaked?
Sarrainodu Movie Song leaked : Allu Arjun and sucessfull director’s Boyapati Srinu’s Sarainodu is now on list of movies which is effected by leakage pre release. Movie producers gave a stern warning that people who use this songs in any form are liable for legal prosecution. A complaint has been lodged with Cyberabad police complaint in this regard. Police to investigate the matter. Producers expressed concern that movie content is pilfered when producers take great pains to ensure a quality product. 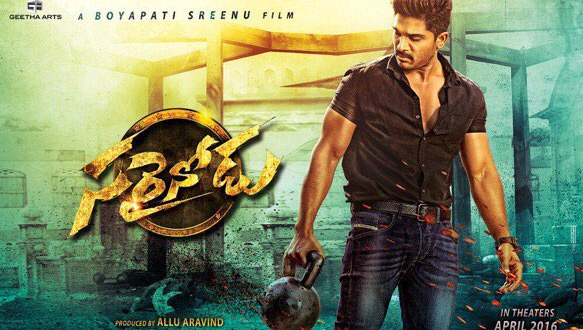 Allu Arjun’s Sarainodu movie shooting almost reached the end. Recently the songs shooting was done at Salar de Uyuni, Bolivia, which is the world’s largest salt flat. The Salar de Uyuni is the most scenic location, that’s the reason the makers have chosen to shoot the song there.
The Sarainodu movie is coming under the direction of Boyapati Srinu. SS Thaman is composing the tunes for the film. Rakul Preeth Singh and Catherine Terisa were pairing up with Allu Arjun for this film. It was heard that Anjali is going to be appear in a cameo role in the film and Kanche fame Disha Patani is doing the special song in this movie. After S/O Satya Murthy, a family oriented film Bunny is now coming up with a full commercial entertainer movie. The Sarainodu slated to release on 8th April, on the eve of Bunny’s birthday.

Rakul Preet Singh and Catherine Teresa play the female leads. Heroine Anjali is sharing screen space with Bunny for the first time in a special song. Movie’s release as anticipated will be in April as a pre summer treat to all the mega fans.The movie that is all set to hit the theatres on April 22nd.