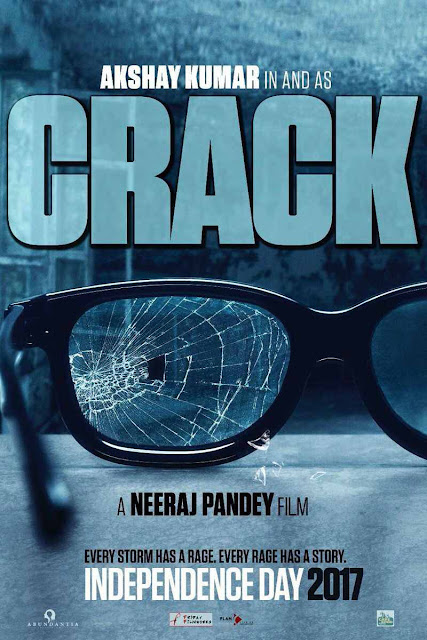 Crack Hindi Movie Poster : Akshay Kumar is all set to collaborate with director Neeraj Pandey for one of his upcoming movies. After “Special 26” and “Baby,” Neeraj Pandey will direct Akshay in his next film titled “Crack.” Which is Scheduled To Release on 2017 Independence Day. This Flick Features Akshay Kumar And Film Directed Neeraj Pandey This Is Third Time Akshay Collaborating With Neeraj Pandey.

Advertisement
Akshay Kumar shared the information on Twitter and also revealed the first look poster of the film. Akshay also revealed the release date of “Crack”, saying that it will hit the screens on Independence Day 2017. “Friends, I’m happy to share with you that after Special 26 and Baby, in 2017, I’m collaborating with Neeraj Pandey once again! ,” Akshay Kumar tweeted.

The “Crack” poster  shows a pair of spectacle glasses, one side of which has a crack. The movie will apparently be based on a very serious plot as the poster says, “Every storm has a rage, every rage has a story.” For More Film News Subscribe To IndinTalks .