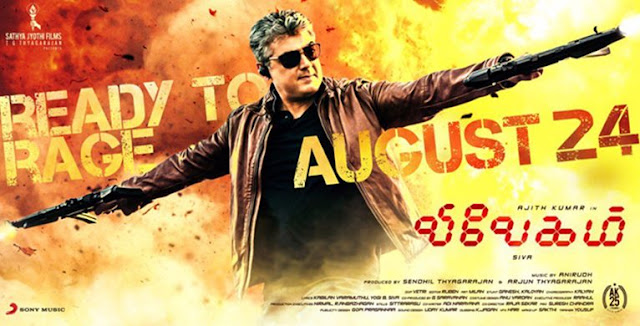 Vivegam Movie Tickets: The most awaited film of Thala Ajith Kumar starring ‘Vivegam’ it’s all set to hit the worldwide screen on Thursday 24th, August. Book the Vivegam Tickets from leading online portals like BookMyShow, Justickets, Paytm etc. Vivegam will have a simultaneous release in Telugu and has been dubbed as Vivekam directed by Siva and produced by T.G.Thyagarajan under the banner, Sathyajyothi Films.It is releasing a huge number of theatres in Tamil Nadu and overseas countries.
The Vivegam film stars are Ajith and Kajal Aggarwal in lead roles in the lead roles, while Vivek Oberoi, Akshara Haasan, Aarav Chowdhary and Karunakaran in important roles.The music is scored by Anirudh Ravichander, the cinematography is handled by Vetri and the film is edited by Ruben. Recently, The film cleared with a U/A certificate and run time is locked to 2 hrs 29 minutes.
Now fans have high expectation on Vivegam movie, and eagerly waiting to watch the film on big screens. The advance booking of Vivegam movie has already started in Chennai and other parts of Tamil Nadu. Reportedly, The film is releasing in 900+ screens in Tamil Nadu.According to a source, the Vivegam movie tickets are selling like hotcakes. So Grab your ticket fast, before Housefull.

The Vivegam Movie Tickets are selling like hotcakes in leading movie tickets portals you can also book Various movie ticket booking portals such as @ Easymovies.in, Spicinemas.in, and other online ticket booking websites have opened the ‘Vivegam’ online tickets booking gateways.The audience can pre-book their slot, day to watch and a number of persons to watch the film.
Facebook
Twitter
Pinterest
WhatsApp
Telegram
VK