Theprimetalks.com
Advertisement
Actress Radhika Apte Facebook Account HACKED: Bollywood Hot Actress Radhika Apte has taken to Twitter to announce that her Facebook Account has been hacked yet again. “My Facebook Account has been hacked again. Please don’t msg me on messenger. Thank you,” wrote Radhika Apte. The actor will next be seen opposite Saif Ali Khan in Bazaar. Apart from that, she will also be sharing screen space with Saif and Nawazuddin Siqqui in TV series called Sacred Games. The TV series will be aired on Netflix and is based on Vikram Chandra’s book which covers Mumbai like never before.

Radhika Apte will reportedly play a RAW agent in the movie and will be seen pulling off some powerful punches. She will also be seen with Akshay Kumar, Sonam Kapoor in Twinkle Khanna‘s maiden production, Padman. A new poster of the show released some time ago and it has already in news for its unconventional content.

The movie which is majorly shot in Madhya Pradesh is slated to release next year in April. Radhika Apte entered the industry with a small role in the 2005 release “Vaah! Life Ho Toh Aisi!”, and is known for films like “Shor in the City”, “Kabali”, “Phobia”, “Badlapur”, “Manjhi – The Mountain Man” and a short film “Ahalya”. 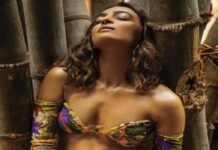