The American Born Confused Desi – ABCD Telugu Movie starring Allu Sirish and Rukshar Dhillon, The ABCD film has hit the screens today and let’s see how it turns out to be. ABCD Telugu Movie Review and Ratings has received mixed talk from the audience around the world. ABCD – American Born Confused Desi is a comedy drama and it is a remake of the Malayalam film of the same name. Madhura Sreedhar Reddy and Yash Rangineni have produced the movie under the banner Madhura Entertainment. ABCD Movie has received a U certificate from the censor board and its runtime is 2.25 hours.

Aravind alias Avi (AlluSirish) is a son of a millionaire NRI (Nagababu) who migrated to the USA 25 years ago. Being a rich kid, Avi spends up to $20K per month which scares his dad. Nagababu sends his son to India to make him understand the value of money, value of hard work. After Avi reaches India, all his credit cards are disabled so that he doesn’t get easy money, also all his USA contacts have been alerted not to send money to him. Rest of the film is about how Avi and his friend survive the slum life in India.

Director Sanjeev Reddy has made some minor changes in the original screenplay to suit the taste of Telugu movie buffs. The first half of the movie is routine and slow and some comedy scenes keep you engaged here. The second half is no better than the first half, say the audience. Allu Sirish has acted well, in climax scene his speech is impressive. Bharath as hero’s friend is fine as well. Actress Rukshar Dhillon has a limited role, acted okay. Nagababu is adequate as the hero’s father.

Hero Allu Sirish has delivered good performance, which is the highlight of ABCD. Rukshar Dhillon has done a good job and her chemistry with the hero is one of the attractions of the film. Nagendra Babu, Master Bharath, and Kota Srinivasa Rao have done justice to their roles

Overall, #ABCD is a Youthful Entertainer with good performances from Allu Sirish, Rukshar Dhillon, Master Bharath, Vennela Kishore is hilarious in the role of frustrated news reader in BC centers this film may find some audience and elsewhere it will be an uphill task to bring the audience to the theater with this content. Watch ABCD Telugu Full Movie to know about this American Born Confused Desi’s Journey. 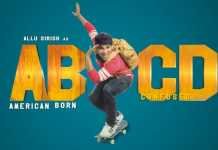