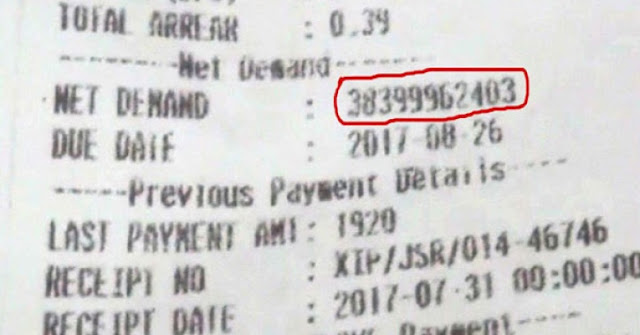 A man from Jamshedpur received the shock of his life when he saw that his electricity bill which amounted to Rs 3800 crore.The Electricity was disconnected from his home as he was handed the non-payment of the bill by the Jharkhand Electricity Board.
The man who lives in Jharkhand named, BR Guha was in an absolute shock after this incident. Speaking to the ANI, which is reported by India Times, he said: “It came as a surprise to us. We didn’t anticipate this. We have a house of 3 rooms. We use three fans, three tube-lights, and a TV at times. How can we have such a huge bill?”
He further added: “My mother is a sugar patient and my father has pressure. It was only after our neighbors intervened that we were able to do anything.”A complaint has been lodged against the Board and matters are being looked into._With Inputs From ANI