47 Days Movie Story: Ravi (Ravi Varma) handles a case in which he is in a hurry to close. He meets his friend, ACP Satya Dev (Satya Dev), and tells him the details over a drink. Later Satya Dev finds that there is a link between Ravi Varma’s case and his wife’s death. Satya Dev is a suspended ACP. He finds it as an opportunity to find answers to his wife’s death (by suicide) and also prove his credentials as a cop. What is the mystery he uncovers in 47 days is what the movie is all about? (Satya Dev Locked)

47 Days Movie Review: Pradeep Maddali makes his debut as a director with the movie. For a mystery thriller, he has come up with a simple plot and fails on all critical aspects of the narration. 47 Days is a terrible thriller and one of the laziest written and executed in a long time. There is zero effort to make it work. If you like Satya Dev, forget that this film exists. If you love thrillers, make sure others (including you) feel the same as those who like SatyaDev.

47 Days Movie Verdict: Overall, Actor Satyadev starrer 47 Days Telugu Movie has a decent story. The movie has predictable twists and the lack of gripping scenes that a thriller needs are missing. 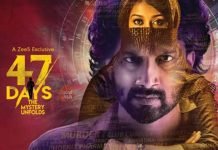