Aha Originals 11th Hour Telugu Web Series story unfolds over one night in just over 12 hours in Hyderabad. Aratrika Reddy’s (Tamannaah Bhatia) father Madhusudhan Reddy prefers his son Aditya over his daughter. He was left with no choice but to let Aratrika take over the Aditya Group of Companies when his son fell sick. Aratrika Reddy’s dream is to provide clean and safe electricity to all Indians at affordable prices using the revolutionary AHNR technology.

Aratrika takes up a bank loan to invest in it, but she faces roadblocks every step of the way. However, due to a political conspiracy at the national level, Aditya Group is on the verge of liquidation. Aratrika Reddy and the key stakeholders have to pay Rs 9,000 plus crore to the Imperial Bank by 8 AM the next morning to save their company.

Aratrika’s ex-husband Siddharth Singh (Vamsi Krishna), business rival Rajvardhan Rathore (Shatru), Imperial Bank Head Sundar Das (Srikanth Iyengar), a Dubai Sheikh named Prince Sadiq (Anirudh Balaji) individually place proposals worth millions in front of Aratrika Reddy, but she declines them all and awaits a miracle to save her company by sunrise. With her dreams and the company’s future at stake, will Aratrika Reddy manage to pull off a miracle or does she have a master plan in her mind? Watch 11th Hour Web Series Online on Aha to find out more.

11th Hour Web Series tries to show how difficult it is for a woman to head a business when all her contemporaries are rooting for her fall. It also shows that entrepreneurship is a male-dominated sector and a woman needs to prove herself every step of the way to make others understand her worth. While this seems to be the theme of Tamannaah 11th Hour, it doesn’t show on screen due to its superficial treatment. The screenplay lacks depth and it becomes too difficult to feel for the characters.

Aratrika Reddy’s company will go out of her hands in 12 hours, but there is no palpable tension on her face. She wastes considerable time waiting for her mentor to save her. The 11th Hour Web Series All eight episodes, with each running for around 20 minutes, follow a non-linear pattern. The conflicts keep building up till the 7th episode and it converges in the final one. However, the 11th Hour climax isn’t convincing either. It leaves a lot of questions unanswered and the 11th Hour climax feels rushed.

Overall, the 11th Hour Telugu Web Series shows Tamannaah aka Aratrika Reddy faces a multi-layered high-stakes boardroom challenge that unfolds over one night with a mixed bag of emotions and thrills. 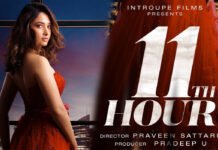 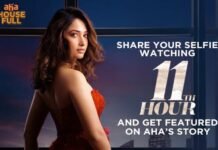 Share Your Selfie Watching 11th Hour and get featured on AHA stories! 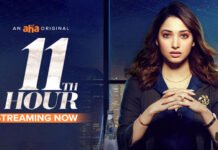