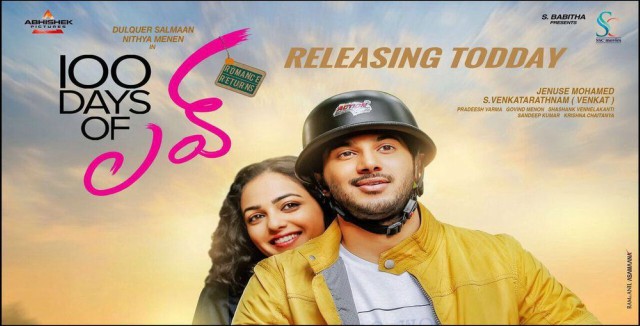 Story: The movie (100 Days of Love) is all about  Rao Gopal Rao (Dulquer Salmaan), who is a writer and meets Savitri (Nithya Menen) one night when they get into the same taxi and falls head over heels for her. He starts searching her with the assistance on his companion (Sekhar Menen). Finally, Rao Gopal find her and when he decided to express his love for her, he came to know that she was her old classmate whom he hated. How Rao Gopal  will change his mindset and win the heart of Savitri, form rest of the story.
Performance:Dulquer Salmaan has done a fantastic job. His body language and performance is appreciable.  He became successful to hold  the movie till end by his stunning performance. Nithya Menen is looking very pretty and that is exactly what her character requests. She got less screen space in the first half of the movie. Her chemistry with Dulquer Salmaan in the second half  is fantastic.  Praveena, Aju Varghese, Vineeth, Rahul Madhav, V.K Prakash and Jacob Gregory have done justification with their role.
Analysis: The major asset of the movie is blush making on-screen chemistry between Dulquer Salmaan and Nithya Menen. The  predictable story line and week screenplay are the major drawback of the movie. Jenuse Mohammed  woven the script in an unpredictable manner.  Overall 100 days of love is a heart warming tale.
Public Review : The audience and critics say that “100 Days of Love” deals with a routine love story. The first half the film has been criticized for a slow-paced narration, while the second half is predictable.Dulquer Salmaan and Nithya Menen have done justice to their roles and delivered good performances. The sparkling chemistry between the two is the highlight of “100 Days of Love.” Supporting cast of Sekhar Menon, Aju Varghese, Vineeth, Praveena, Rahul Madhav, VK Prakash, Abhirami Suresh and Jacob Gregory is also an asset of the movie, the critics and viewers said.
Verdict: The100 Days of Love is a film which is dubbed into Telugu to just cash in on the huge craze of Nithya Menen and Dulquer. The lead pair’s chemistry is the biggest and only highlight of the film. But the lethargic first half and predictable nature of the script makes this movie an below average fare and can be watched only if you have absolutely nothing else to do.
Advertisement